Last season RHS boys soccer lost 4-0 at home to Muncie.
Last night the boys trailed 1-4 in the second half at Muncie. Things were not looking good for the Red Devils.
Muncie scored very early in the match. Denis Herrera then scored on a penalty kick for RHS, but Muncie scored 2 more goals before half to go into halftime up 3-1. Richmond’s defense and goalkeeper Sid Sagna were under pressure as Muncie seemed to control the tempo of the game in the first half.
Soon after the start of the second half Muncie score again to go ahead 4-1. However the defense was bolstered by more possession by the offense. Richmond had a couple more close attempts, and they finally found the back of the net. As the offense strengthened, the defense firmed up its line and Muncie got knocked on its heals. The Red Devils scored 2 more to tie, and then finally scored the go ahead goal in the last 10 minutes. All 5 goals came from Denis Herrera, but solid outside runs and good ball movement spread the defense and allowed Denis to find his mark.
What is #gRit? Trailing 1-4 in the second half before turning things around to win the match. Way to go Red Devils! 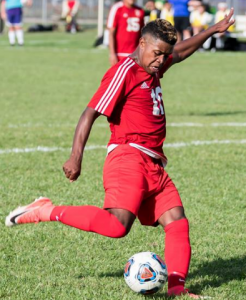