The Devils and Patriots both came to play at historic Lyboult Field on September 11, 2017. The teams gave their fans a show, which will not soon be forgotten. Big players, bigger plays, and an electric atmosphere made for an unforgettable experience.

The Red Devil offense was something to watch tonight! Strong performances again by Ely Ervin, Marquis Johnson, Jon Carter, and Anthony Cross. Not to mention, the offensive line is coming together quite well in mid season. The Red Devils are calling in plays from the sidelines, without huddling and it really starts to wear down the defenses as the game continues. This was clearly evident in the second half of the game, as the Red Devils came back from 22-12 deficit. The offense continues to improve with each outing and is fun to watch.

The defense struggled in the first half to stop the running of the Patriots running backs. The Devils kept trying to tackle high and were being shed off, like water on a duck’s back. After making some adjustments during half-time, the defense showed up and shut down the offense of the Patriots. Great team defense, all around, but some standouts were DeMarco Owens, Jed Moore, Jo’elle Webb, and Jake Necessary. The Devil’s night was saved by Jake Necessary’s ability to track down the runner and cause a fumble, which was recovered by Jed Moore.

Special teams had another great game as well. Jon Carter ran a kick off back to the house to put the Devils back in great position to be competitive and almost took a punt back as well. Bryson Fugate’s kicking is improving with each week and is causing some difficulties for the return team. A number of his kicks were mishandled and created turnover opportunities.

After all was said and done, the Red Devils went into victory formation and was able to celebrate a tough 26-22 win. The guys deserved to win that game, they played their hearts out. Nothing is more satisfying than battling back in the second half and winning a tough game. These are the games that shape the character of a player and team.

The Devils are back in action tonight facing Muncie South. With little rest, the Devils are going to have to rely on their teammates and conditioning to pull out another win. 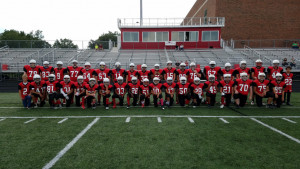