There was a lot to like about Richmond track in Eaton on Friday night.

After a slow start to the season, many Devils had a strong showing among the 14-team field of athletes. In the fastest event of the night, junior Jermayne Stanley took home a blue ribbon in the 100 meter dash with a time of 11.26 seconds, followed closely by freshman Gage Puterbaugh with a fifth-place time of 11.59 seconds. The boys followed the 100 up with scoring finishes in the 200 meter dash, with a third-place 23.35 second finish for Stanley and a seventh-place 24.34 second finish for Puterbaugh.

In his 400 meter dash debut, senior Kody Reece put up a fifth-place time of 52.95 seconds. Junior Devon Deloney also snagged a point in the 110 meter high hurdles with his 17.93 second eighth-place finish.

The field events were not to be outdone, with several scoring jumps and throws, but places and distances for the boys shot put, pole vault, and long jump were not included in the scoring packet.

The boys finished the night in fifth place out of fourteen.

Not to be outdone, several lady Devils had a strong showing Friday night as well. Senior Riley Austin was a scoring champion for the Devils, bringing home first place in the long jump with a jump of 16’1″, a tied second place in high jump with a 5’0″ jump, and third place in the 200 meter dash with a time of 27.51 seconds.

Sophomore Riley Wetzel also scored for the Devils with a seventh-place time of 1:07.76 in the 400 meter dash. Taylor Burden also scored an eighth-place finish for the Devils in shot put. Placements for girls pole vault and shot put distances were not included in the scoring packet. 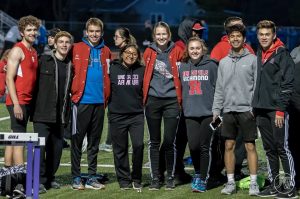