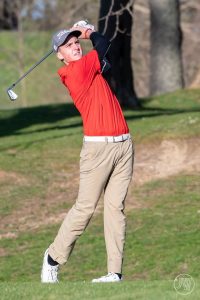 Congratulations to Jake Miller for being named the ESPN 1490/100.9 WKBV Wayne County Athlete of the Week!

Ohio State commit Jake Miller was low medalist Saturday at the Delaware Invitational. Jake shot a 2-under 68 to win individually by 4-strokes. Miller shot a 4-under 31 on the front 9. He had 8 birdies on the day.

His win Saturday wrapped up a strong week where he won low medalist Monday in a three way match against Franklin County and Rushville. Jake shot an even par 36 at Forrest Hills and was also low medalist against Wednesday against Monroe Central with a 37 on a very windy day where the greens were hard and difficult to maneuver.

Overall, Miller has three wins and provides extremely solid leadership as the team captain with helping the younger, less experienced players prepare for their rounds.

Miller is a two-time state qualifier where he placed 10th as a freshman and 22nd as a Sophomore. Miller is looking to improve on those finishes this year.

Miller also plays tennis and was an integral part of the team as one half of the #1 doubles.