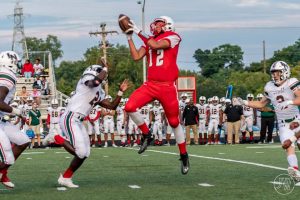 As Bleacher Creatures began filling in the stands with their USA spirit wear and the band began marching around Lybolt field for pre-game, the Richmond Red Devils prepared for their home-opener against the Wildcats of Lawrence North High School. The team kept their spirits high, fully aware that they would be challenging the most recent, state contender.

During half time the Red Devils still had yet to score but they were not giving up anytime soon. While the two teams reflected on the first half in the locker rooms and the band prepared to perform their show, To Glory, fans recognized 7 former Red Devils who continued their football career at the professional level.

The team continued to persevere into the third quarter. With six minutes left in the game Alec Snedigar completed a pass to Treshawn Jones who ran into the end zone.

Richmond ultimately fell to the Wildcats 7-52.

The Red Devils will kick off their conference schedule this Friday as they travel to face Indianapolis Tech at 7:00 PM.

The Red Devils will return home on September 7 to face Muncie Central at 7:00 PM.  We had a great crowd last Friday, and we hope to see you at the game next week. 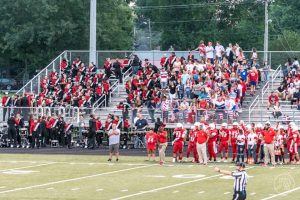