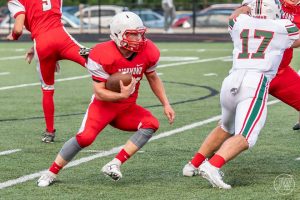 Indianapolis Arsenal Tech – The Richmond Red Devils put up a tough fight against Indianapolis Arsenal Technical but unfortunately, “came out flat, “ according to head coach Tony Lewis. The final score of the first conference game came to 7-32.
According to Lewis, “The feet can be summed up in one word, penalties.” The Red Devils had shot themselves in the foot from lack of execution, effort and finishing plays that resulted in 15 penalties.
Despite the scoreboard, there were signs of good plays and effort. Running back, Wyatt Byrd, rushed for 140 yards on 24 carries averaging nearly 6 yards per carry, along with two receptions for 24 yards. Lewis felt that the Offensive Line played more physical, stayed on their blocks and communicated better than they did against Lawrence North. “We all need to be rowing the boat in the same direction,” Lewis believed.
The Red Devils will be hosting a rivalry game against the Muncie Central Bearcats this upcoming Friday. Players look forward to loaning their away jerseys to any favorite staff member for Friday’s spirit day before the game. As the Red Devils move forward into the season they extend their appreciation for support from fans and the student body.
Maranda Coyle