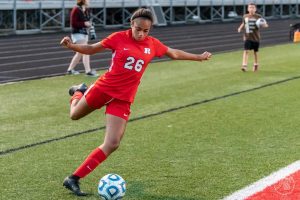 Nakala Bennett has been a Giant killer this season with 6 goals in two games against Marion.

Marion again had no answer for Bennett’s speed as RHS beat Marion 5-0 in the second game of the NCC Tourney in Kokomo. Nakala scored at the 15 minute mark to give RHS the 1-0 lead off a through ball from VanMiddlesworth, in what was a highly physical contest that was close before the game was blown open in the final 15 minutes. Payton VanMiddlesworth added two goals and two assists.

The story of the day was the stellar play of the back line consisting of seniors Erin Williams, Marie Suarez, Mackenzie Henry, and Sophomore Aaliyah Porfidio-Brown. Holding Mid, Madeline Stults was again entrusted with stopping the state’s 2nd leading scorer (Taylor Kitts), shutting her out. The back line kept the Marion offense at bay most of the day.

In the early game, RHS lost to Lafayette Harrison 0-3. The defensive line withstood continued attacks and the was close throughout. Harrison scored on a corner kick and a couple of non cleared balls.

Richmond plays at Union Co. on Tuesday at 7:00.