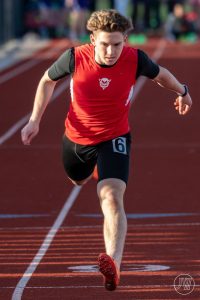 The Richmond Red Devil Track team met with Eastern Hancock in the first outdoor meet of the season.

The team showed areas of strength as well as areas for improvement and growth.

For the girls, Nakala Bennett took a win in both 100m and 200m dash events. Loni Eubanks was right on her heels grabbing up second place in both events. Brianna Hillard scored in two events taking second place in both the 1600m and 400m. Brendy Mendoza rounded out the running events by placing third in the 800m. The Lady Red Devils scored in all field events; Jayci Allen took the win for high jump, while Aaliyah Porfidio-Brown won the long jump. Lauren Carr came in third place with her shot put throw and Molly O’Brien grabbed third in discus.

On the boys side, Gage Puterbaugh won both the 100m and 200m events while Teddy Sumling grabbed second in the 100m. Nate Parsons placed third in his event, 100m hurdles. Richmond took first and third in the 400m with Vincent Narcisse and Darius Hogg placing respectively. Josh Jones proved once again strong in distance with a third place finish in the 1600m and second place in the 3200m. The filed events saw some PRs across the board. New comer, Koream Jett tied for second in high jump. Hunter Burden secured third place with his shot put throw while Rayner Eddy took the win with his big discus throw.

“I’m happy that we got our first meet under our belt. We were missing a few key athletes tonight which hurt us however, our Freshmen stepped up and grabbed some big points for us,” commented new head coach, Britni Gettinger.

The Devils travel to take on their first NCC opponent, the Anderson Indians this Wednesday at 5:30.