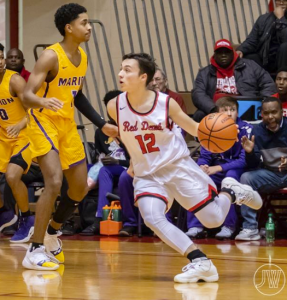 April 13, 2019 RICHMOND, INDIANA – On Friday, April 12, 2019, Jalen Hillard, a senior at Richmond High School, signed a Letter of Intent to play basketball for Manchester University. Manchester University is located in northern Indiana with 1,600 students from 28 states and 20 countries.

Jalen, the son of Shane and Laura Hillard, was a standout point guard for the Red Devils this past season. Known as a pass first point guard, he led the Red Devils in assists several games this past season including a season best 16 against Indianapolis Tech. Jalen averaged 4.2 points per game while shooting 40% from 3-point range and 75% from the free throw line. Jalen scored season highs of 18 against New Palestine and 16 against Jay County.

RHS basketball coach Shabaz Khaliq said, “Manchester is not only receiving a good basketball talent, but a tremendous young man. By adding Jalen to their institution, Manchester University has increased the character, dedication, and citizenship of their student body. I look forward to Jalen’s growth on and off the basketball court during his time at Manchester. There is little doubt that he will make all here at Richmond High School proud.”

Once enrolled at Manchester University in the Fall, Jalen will be majoring in Physical Education.

For more information, call 973-3300 or go to www.weRrichmond.com for further information about Richmond Community Schools.
###