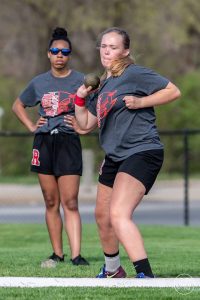 The Red Devil track team traveled to Union City Monday night to participate in a quad meet. Richmond went head to head with Union City, National Trail, and Bradford. Things fell into place for the Devils and both the girls and boys teams found their first win of the season.

The field events got the Lady Red Devils off to a solid start. Molly O’Brien picked up second place in shot put and found first in the discus. Grace Cartee placed second allowing the Red Devils to sweep the discus. Aaliyah Porfidio-Brown and Katelyn Evans were second and third respectively in the long jump. Jayci Allen was the highest jumper and Iyana Waddell was third in high jump. Nakala Bennett earned blue ribbons in the 100 meter dash, 200 meter dash, and 400 meter dash. Payton VanMiddlesworth found her blue ribbons in the distance events, 1600 meter run and the 3200 meter run. Ashley Kelley worked hard to get third in the 3200m run and Brianna Hillard was fourth in the 800 meter run as well as in the 1600m run. Khalidah Hickson was second in both 100 meter hurdles and 300 meter hurdles. Allen placed fourth in the 100m hurdles and Waddell was fourth in the 300m hurdles. Tamia Hampton finished second in the 200m dash while Loni Eubanks was second in the 100m dash. The girls won both the 4×100 relay (Eubanks, Porfidio-Brown, Hickson, Hampton) as well as the 4×400 relay (Eubanks, Bennett, Hickson, VanMiddlesworth). The girls team finished with 100 points.

The boys team found success throughout the evening. Raynor Eddy and Aiden Snedigar threw the disc into second and third place respectively while Hunter Burden placed fourth in the shot put. Long jump saw Koream Jett take another win with Sekaye Maitland nearby in third. Jett took third in high jump as well as in the 100 meter dash. Josh Jones won the 1600 meter run and placed second in the 3200 meter run. RJ Thalls helped in the 1600m run with third place.  Jake Necessary chipped in with a second place finish in the 800 meter run. Gage Puterbauch took blue ribbons in both the 100m and 200m dash. Owen Rogers placed third in both the 110 meter and 300 meter hurdles. The Devils also swept the 400 meter dash when Alec Snedigar took and win and Darius Hogg placed second. The boys also won both the 4×100 (Puterbaugh, Vincent Narcisse, Jewell Taylor, Jett) and 4×400 relay (Narcisse, Hogg, Taylor, Snedigar). The boys team fnished with 85 points.

“The kids have been putting in hard work and they are starting to see their efforts payoff. This couldn’t come at a better point in the season with NCC being Friday we need everyone to be in the best shape both mentally and physically,” Coach Britni Gettinger added.

The Intermediate School will host Connersville and Seton at Lybolt field on Tuesday while the Varsity team travels to Lafayette on Friday for NCC competition. 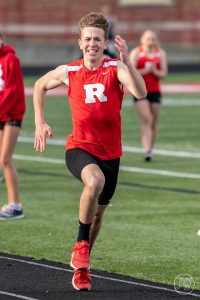