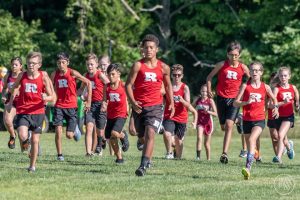 In the girls’ race, the team scored 152 points to receive 7th place. Keena Barker placed 4th overall with a time of 13:37. Jackie Orihuela placed in the top 30 with a time of 15:38, placing 23rd overall. Clara Noxon received a personal record, scoring a time of 19:11.

The boys team place 2nd overall, scoring 80 points as a team. The first Richmond runner, Alex Orihuela, placed 13th overall with a time of 13:46.0. Tommy Wilson achieved his goal this race by finishing without stopping to rest in a time of 20:26.

We had excellent performances from everybody this weekend. We are excited for the next meet at IU East on Thursday, September 12th. Run, Race, Richmond!