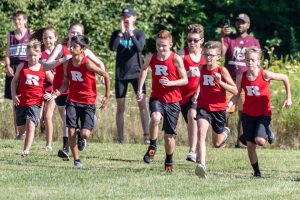 The boys team placed 6th overall, scoring 154 points as a team. The first Richmond runner was Jamie Pegg. Jamie placed 21st for the boys’ race with a time of 11:55, making this his personal record for the season. Of all the teams who competed this Saturday, Richmond boys had the smallest spread between the first runner and the fifth runner. There were only 29 seconds between our first and fifth runner!

This was our best showing so far and we hope to continue to improve as we near the end of our season. We had 10 prs total this weekend including; AJ Carter, Isaiah Moore, Ethan Newton, Alex Orihuela, Jamie Pegg, Brodie Morken, Amaya James, Aubrey Scalf, Jackie Orihuela, Katie Mathena, Clara Noxon, and Katy Peacock.

IS cross country has their last home meet of the season tonight (Monday) at 5:00 at the Glen Miller golf course against New Castle.  Come out and support the Red Devils!