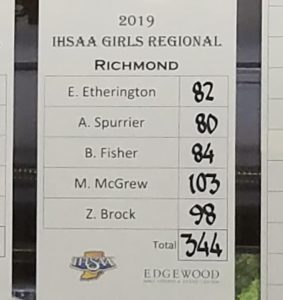 The Lady Red Devils wrap up their 2019 campaign with a 7th place finish at the Regional Championship as only the top 3 teams advance to State.

Coach Brent Struewing said “This is the best I’ve felt after a competition all year” as the girls showed much improvement in their games as well as their management of their emotions. Ashlyn Spurrier was the shining example of this with shooting her career low for 18 after blasting her first shot of the day Oscar Bravo left. Ashlyn, Esther Etherington, and Brianna Fisher met or beat Coach’s challenge to shoot a target number. Freshman Zoe Brock missed her target only by 2 strokes and was able to do so by shooting 6 strokes better on her back 9. Mackenzie Mcgrew struggled with the quirky Edgewood course but was able to shoot close to her average score.

Brianna leaves big leadership shoes to fill but lessons learned by Ashlyn and Esther indicate the team is in good hands. Especially with the edge (or sass???) Freshman Zoe demonstrated at the end of the year and with the development of JVers Macky Laughlin, Molly Mendenhall, and Ally Capps.

Best wishes to exiting Seniors Bri, Mackenzie, and Gabby and congratulations to all the Lady Devils on a great year filled with personal bests for everyone, a Sectional Championship, and wonderful memories! Coach Brent and I couldn’t be more proud of this team! 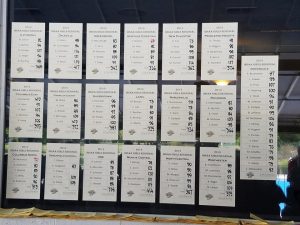