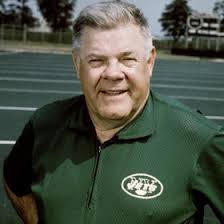 Weeb Ewbank graduated from Richmond in 1924. After graduating from Miami University, he was an assistant coach for the Cleveland Browns. He led the Baltimore Colts to NFL championship in 1958 and 1959 and the New York Jets to victory in Super Bowl III in 1969. He is the only coach to win a championship in both the National Football League and the American Football League. Ewbank, was known as a mild-mannered coach who favored simple but well-executed strategies. He was inducted into the Pro Football Hall of Fame in 1978. 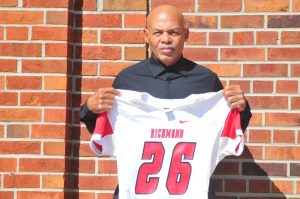 Vince Allen graduated from Richmond High School in 1973. Allen graduated from Indiana State in 1977 where he was a star running back. Allen played one season with the Hamilton Tiger-Cats of the Canadian Football League in 1978. He played in three games, rushing for 145 yards on 34 carries, including one touchdown. He also played a role in the passing game, making six catches for 78 yards. As a return specialist, Allen contributed 10 punt returns and four kick returns. Allen also signed with the Chicago Bears of the NFL in 1980. Allen was elected into the Indiana Football Hall of Fame in 2000.

Two large football jerseys have been added to the exterior wall of Civic Hall to honor these alumni. The Richmond Youth Football League sponsored the jerseys and the youth teams will be highlighted during halftime. Kickoff is 7:30 PM, and admission to the game is $5 per person.
Bridget Hazelbaker, Communication Coordinator, (765) 973-3329, bhazelbaker@rcs.k12.in.us