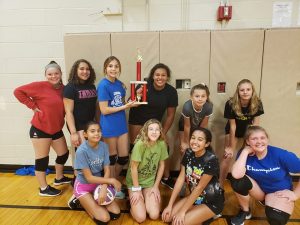 The Test Tiger 7th graders continued to show improvement as they defeated Centerville and Rushville to capture the tournament championship at the Connersville Invitational.
Opening the day with the Bulldogs of Centerville was a wake-up call for the Tigers. The first game was a battle from the beginning with both teams fighting to gain control. Ta’Layah Pegg kept the Tigers in contention with a five point serving run. The Bulldogs fought back to even the score. Errors were frequent on both sides of the net and neither team could gain momentum. Neveah Rice added four from the line and the Bulldogs responded with four of their own. Three more by the canines put Centerville in control at 23-21. Emma Stites came off the bench with three excellent serves to put the Tigers ahead, 24-23. A side out, to save game point evened the score at 24-24. The tension was high and the crowd was boisterous as Centerville delivered the final serve. An anticlimactic serving error by the Bulldogs ended the game at 25-24 with the Tigers earning the hard fought victory.
Anticipation was high for the second game. Both teams expected a difficult, competitive sequel and both teams were prepared for a knockdown, drag out fight to the finish. Once again, Ta’Layah Pegg demonstrated her serving prowess. She started the game putting the Tigers up 5-1. The following rotation, Emma Stites returned to the court and delivered eight more points putting the Tigers up 13-2. This dominance was unexpected by either team and proved to be too much for the Bulldogs handle. Trading sideouts multiple times edged the Tigers closer and closer to ending the game. Having gone a full rotation around the court, Pegg delivered the game ending points. Her final four points ended the game at 25-9 in favor of the felines. With the game two victory, Test moved on to the championship round to face the Rushville Greyhounds.
The finals were not going to be a cake walk for either team. Rushville was excited coming from their win over the host Connersville Spartans. They were much taller than the Tigers and expected to win.
Game one was all about the Greyhounds. Numerous passing errors and five serving errors by Test proved to be the downfall of the Tigers. A final score of 25-15 put Rushville in control and left the Tigers in a precarious position.
The second game was an opportunity for the Tigers to regroup. The effort on the court was better, the play was cleaner and no serving errors kept the Tigers in the game. The score was close throughout the second set. Back and forth with each team trying to maintain a lead became the norm. The one or two point lead by either was quickly covered after each sideout and a tie score at 23-23 had the pressure turned all the way up. A timeout by Rushville allowed everyone to take a breath and get ready for the finality of the upcoming plays. Carmen Hardwick subbed into the game to serve the critical last two points and the Tigers scored a 25-23 win. It was nervousness, it was excitement and it was scary. And it was a Test win. The third game would be fierce.
Game three was a totally different experience. The air had been let out of the balloon and the pressure was gone. Both teams slipped into a comedy of errors. During a shortened game to fifteen, the errors add up quickly. Fortunately for Test, the same problems were occurring on the other side of the net. This resulted in many ties along the way with neither team having an advantage. At 13-13, Carmen Hardwick served the final two points resulting in the game three win and the tournament championship. Unbelievably, this was the only time in the game when Test scored back to back points. A quick rewarding of the tournament trophy and ceremonial photos declaring the Test Tiger 7th graders champions of the Connersville Invitational left everyone happy, hungry and tired.
Submitted by Irwin “Fletch” Fletcher