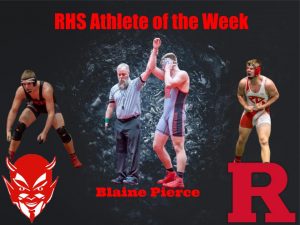 Blaine Pierce has had a senior year to remember.

Pierce played an integral part on the line both offensively and defensively as the football team had their most successful season in recent history.  As a result of his efforts, Pierce was named to the IFCA Region 8 All-Star team last week.

Blaine’s wrestling season has been even more impressive.  Last year Pierce picked up his 100th win, an impressive career milestone that is rarely accomplished during a junior season.  Since then, the wins have continued to accumulate.

Blaine’s accomplishments this year include:

State Finals- We wish Blaine the best of luck as he will wrestle Friday night at Bankers Life Fieldhouse!

CongRatulations to Blaine Pierce- our RHS Athlete of the Week!

Want to nominate someone for the award? Click here for a link to the form. We welcome your recommendations.

Special thanks to John Weber and DOJO Photography for the photographs.