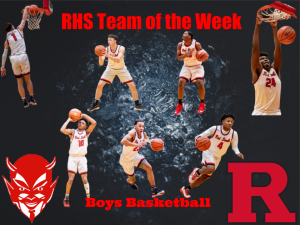 Richmond’s boys basketball team stretched its win streak to 10 games with a 79-75 road victory against Class 4A No. 4 Lafayette Jeff.

Richmond clinched a second-place finish in the North Central Conference, also its best finish since 2015, and improved its record to 15-7, again making it the most victories for a Devil team since 2014-15.

In the victory against Jeff, the lone NCC loss for the conference-champion Bronchos, Richmond rallied from double digit deficits multiple times. The Red Devils had a balanced team effort with big plays from a variety of players, which has been the case all through the season.

Sophomore Tylan Harris had a career-high 27 points, including making seven 3-point field goals, while senior Tytan Newton had 17 points and five assists in the second half alone. Meanwhile, senior Jordan Stolle connected on a pair of crucial 3-pointers in the closing moments of the fourth quarter, while the Devils stayed within striking distance because of the inside play of Cleevas Craig in the first half. Senior captain Koream Jett was dynamic on defense against a couple different normally high-scoring Jeff players.

Richmond turns its attention to sectional play next week. The Red Devils play Greenfield-Central in the opening round on Wednesday at Muncie Central.

CongRatulations to boys basketball- our RHS Team of the Week!

Want to nominate someone for the award? Click here for a link to the form. We welcome your recommendations.

Special thanks to John Weber  for the photographs.