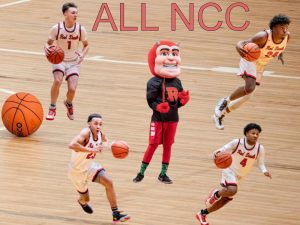 Seniors Cleevas Craig and Tytan Newton were part of the 14-member first-team all-conference group.
Craig led all NCC players in field goal percentage (72 percent) and was a unanimous pick by league coaches. The center averaged 12.3 points, 7.5 rebounds, and 1.9 blocked shots per game for the Devils.
Newton was among the conference leaders in assists, 4.4 per game, while averaging 13.7 points and 3.1 rebounds per game.
Senior Koream Jett and junior Andrew Kroft were also honored by the conference coaches with each earning second-team all-league honors.
Jett averaged 8.1 points, 2.8 rebounds, and 3.6 assists, while also being commended for his defensive efforts. Kroft, who missed out on first-team honors because of a knee injury that cost him the last seven games of the season, averaged 15.8 points, 4.8 rebounds, and 1.9 steals for the Devils.
Richmond finished its season 17-8 and 7-2 in the North Central Conference. The season included a 12-game winning streak and a second-place finish in the league. Mark Rinehart of Harrison won the coach of the year in the conference. Harrison finished tied for second with Richmond, having lost the head-to-head battle against the Devils in January.